I am in a project team with eight people at a client. We developed a new digital learning platform and introduced a new method for workplace learning. In this project, we have many tasks in which different people from the project team, external software provider, and stakeholders are involved. We use a Kanban board to make visible who is working on what. But it is difficult to clarify who is responsible for which task beforehand. And we noticed that the project leader had too many tasks in daily business and had to learn to delegate to avoid overwork. Furthermore, the team was often unsure if they can take over a task without asking the project leader. That’s why I introduced the Management 3.0 practices of the Delegation Poker and Delegation Board with the goal to have better delegation, transparency, and task allocation in the project team.

We realised that the project leader cannot know everything about the project or what is going on. And fortunately, the project leader agreed to that. This is related to the “Darkness Principle” which says that everyone only has an incomplete picture of an event. Nobody knows the big picture. Therefore, managers often cannot make the optimal decision on their own and better decisions are made together in the team, and when they ask the people in your team. I would like to refer to the iceberg of ignorance model. It says the more you are disconnected from your staff, the less you know overall as the following picture shows: 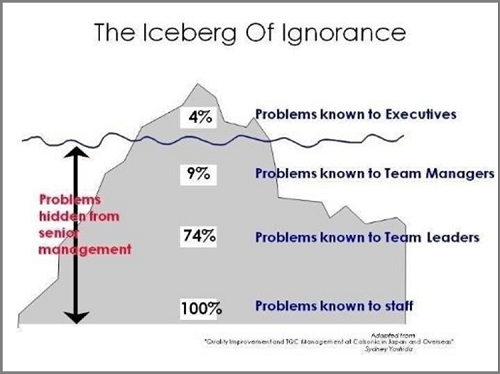 Furthermore, I came up with the Conant-Ashby Theorem in our project team. To make good decisions, you need a mental model of the facts or the system. Hence, it is a good idea to delegate decisions to a smaller unit with better information to make the right decision and to decide more self-organised (subsidiarity principle).

I explained how the practices could help not only allow you to have better transparency and a joined agreement about the responsibility and decision-making authority people should take over. With the delegation board and delegation poker, you can also empower the team and increase employee engagement through more self-organisation within the team. For the project leader, it was important to have a clear and transparent understanding of decisions to be made in the team.

In the project, we discussed which management style is effective and which one we would like to have in our team. The conclusion was to act more self-organised in the project team and empower the people to take over more responsibilities. But for the project leader, it was a mindset shift and new to delegate more tasks. That’s why full transparency was crucial.

How I facilitated the Delegation Poker

To make a first mindset shift and give control and responsibility, I assigned homework to the project leader before our meeting where we played the delegation poker:

I think I will do this pre-exercise for managers in the future. The project leader gave the feedback, it helped to reflect the whole delegation process, and we could use these results and compared them with those of the team in the delegation poker game later. I will experiment more with this pre-exercise.

Delegation poker with the project team

Because we all worked remotely, we invited the whole project team to an online meeting to play the Delegation poker. I explained the goal of our meeting and how the delegation poker would help to openly discuss the authority and decision levels in our project. As a facilitator, it is important to ensure that everybody understands the different delegation levels. For the delegation poker game itself, I set up a Mural board where we could collaborate and “play” visually and remotely.

First, we brainstormed all key decision areas of decisions we had in the project. Then we mapped our existing tasks to these different areas and did an analysis of the current status: does the project leader decide fully in this area, or is the team involved in the decision, and if yes how.

To identify the desired delegation status, the team, and each person in the team would like to have, we played Delegation poker. Every team member got a deck of seven cards – each for one of the delegation levels. You can buy a deck of Delegation poker cards in the Management 3.0 shop. 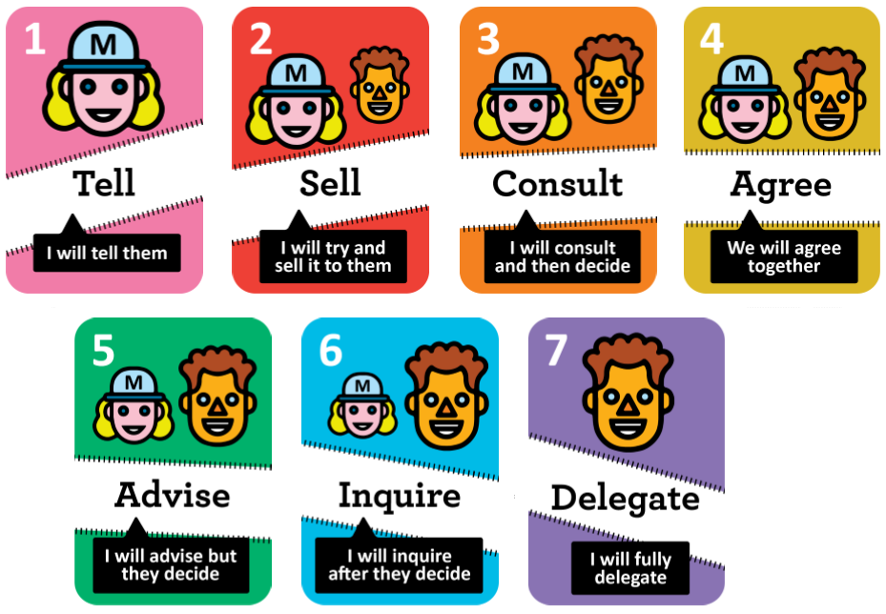 Then we chose a scenario in each key decision area, and briefly described it. Each team member reflected on the delegation-level and chose the corresponding card privately without showing it to the others. After everyone selected their cards, they can then reveal them – they put a sticky note in the appropriate delegation-level column on the Mural board to show their decision.

Each participant receives points according to the value (delegation-level) of his card. We chose to play the “Highest Minority” and the “Lowest Minority” combined – that means these players did not get points and the levels were not considered in the further discussion. With this approach I as a facilitator wanted to avoid that certain people do not always select the lowest or the highest delegation level – for example, the project leader can be afraid of losing control and always go for the lowest delegation-level „tell“ and she is in the minority. The “Highest Minority” avoids that a team member always decides on delegation-level seven „Delegate“ (over delegating) and he is alone. Furthermore, the players with the highest and lowest level had to justify their choices. Only if more team members than one selected a delegation-level, the players earn the points, and the level is chosen for the discussion.

I also explained that as a team we cannot go from a very low delegation level to the highest delegation-level overnight. Being more self-organised is a learning process. In many tasks and decisions, the project leader was okay with „being advised“ or „only informed“.

The goal of the delegation poker game is to get consent. If there is disagreement, a new round and voting for the chosen scenario will take place. The results get more equal in the team. The participants then should discuss and decide on one level of delegation. A mutual understanding here is essential.

We played poker like this for each decision area.

Some people asked if it is essential that the project leader takes part in the delegation game. In my opinion, it is necessary for the manager (in my example the project leader) to participate in the game and reflect authority levels together with the team. Without participation, the results may be not accepted by the manager.

At the end of the delegation poker, we set up a delegation board in Mural for documentation: this board shows our key decision areas and the agreed decision level. We also worked out a team agreement about our decision authority in our project.

In addition to documentation, the Delegation Board also helped us to improve decision-making process continuously. In my opinion, this documentation should not be fixed, but a learning process to make better decisions and becoming more self-organised stey-by-step.

What would I like to try out as a facilitator?

I learned that as a facilitator I must time box each round in a better way. In this session, I let the discussion more flow, but we almost ran out of time. Delegation poker is about getting consent on the delegation levels. However, if the participants do not agree, this can lead to an endless discussion. The next time, I would stop such discussions and postpone them to a later second round or another meeting.

As a facilitator, I would like to experiment with the “Highest Minority” and the “Lowest Minority” in future delegation poker games and try out to play only one of them in one game. I would also like to experiment with different sessions. I did the pre-exercise with the project leader and would like to improve this: maybe a first session to set up a delegation board by the management, a second session with the team only to create another delegation board from the team view, then a third session together with the management and team to compare results and get the discussion started. I think this approach depends on the team and the time they will have for delegation poker sessions and games.

My experiences and key learnings

Get the latest tips, approaches, tools and strategies for working in a virtual or hybrid team and for digital collaboration straight to your inbox.

You can learn more about which cookies we use or disable them under preferences.

Essential cookies should be always activated so that we can save your settings for the cookie preferences.

If you deactivate this cookie, we cannot save the settings. This means that every time you visit this website you will have to enable or disable cookies again.